You might think that Olive was the bully/grinch at the North Pole because she “used to laugh and call him (Rudolph) names” but she is actually part of a mondegreen and not because olive is a color of green. Without defining the word, examples of mondegreens are “There’s a bathroom on the right” (Creedence Clearwater Revival’s “Bad Moon”), “You’ve got mud on your face, front disc brakes” (Queen’s “We will Rock You”) and “Hold Me Closer, Tony Danza” (Elton John’s “Tiny Dancer”). If you guessed that “Olive” is a substitute for “all of” , you’re a music lyric master.

I have been known, however, to botch lyrics on several occasions, despite having been a singer all my life. I once sang “A beautiful snight, we’re happy tonight” (Winter Wonderland) to a large Christmas audience. Here are a few other lyrics (not in performance though) I have gotten wrong:

More mondgreens can be found by searching “Hilarious Misheard Christmas Lyrics” or “Associated Press” for Christmas mondegreens, as some links don’t work. ( Or you can google “mondegreen” or “Lady Mondegreen”

Even well-known songs that people love to sing along with have pitfalls. Look up the actual lyrics to these for a laugh: (A-Z lyrics.com)

When “The Joker” played on the juke box at our local establishment, the bartender, John, said, essentially, that anyone  who knew music would know all the words (I’m a joker, I’m a smoker, etc.) but I looked them up and found this in the second line:

“‘Cause I speak the pompitous of love” Now seriously, what words do you sing there? I thought it was apotheces or apocalypse, which made no sense really.

The photos below are from a family karaoke sing in Shinjuku, Tokyo, Japan three years ago. Japanese karaoke bars feature a private room where you sing your heart out and broadcast to the rest of the place (or not). In America, you can listen to the fun that The Beach Boys had recording Barbara Ann, but singing with friends or family is great fun too and mistaken lyrics just add to the hilarity. The second screen is Ba-Ba-Ba Ba Barbara Ann, a favorite of young Japanese. 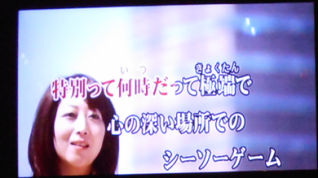 As winter is here, remember when you’re walking in the winter wonderland that “later on, we’ll perspire, as we drink by the fire” I got that right, didn’t I? Happy holidays. Jeanie

My son, Alex, singing in Japanese